Saint Georgios on the mountain 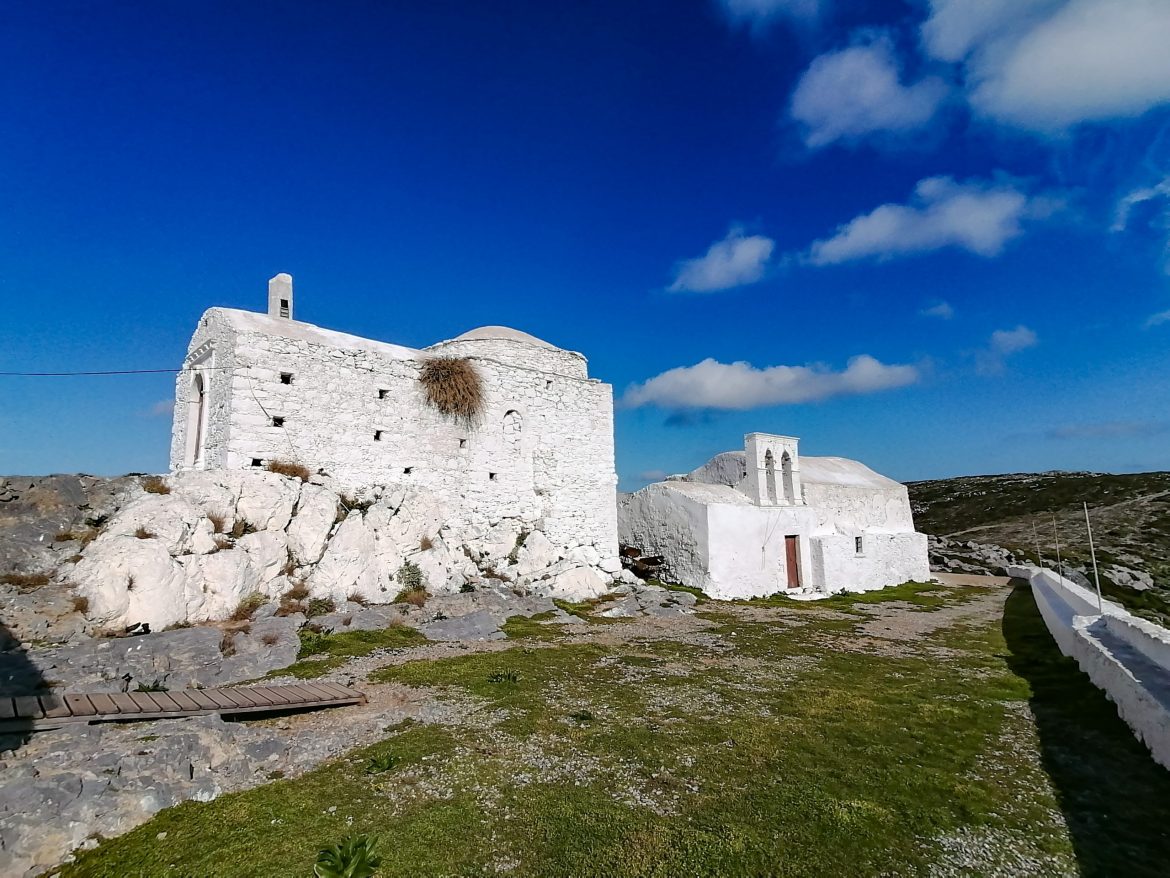 The mountain of Agios Georgios (St. George) rises to an altitude of about 350 m and within a short distance from the archaeological site of Palaiopolis. On its peak flourished the sanctuary of the Minoan colony, located in Kastri. The top of the mountain affords a panoramic breathtaking view stretching from Cape Maleas and Mount Taygetus in the SE Peloponnese to the SW Aegean and Crete. On a clear sky day you may catch a glimpse of the Lefka Ori (White Mountains) and, even farther, of the inland Mt Psiloritis. It’s no wonder, therefore, that the Cretan settlers of Kythera chose the strategic location of St. George to establish the only Minoan peak santuary found so far outside Crete.
The archaeological exploration of the site brought to light architectural remains and a great amount of intact findings, such as ritual objects (one of them even bears a Linear A inscription), bronze figurines of animals and worshippers, jewellery and pottery. It is noteworthy that, while the overall known Minoan bronze figurines amount to 170, the sanctuary of St. George alone yielded 83 figurines. Thus, Kythera added another valuable source for the study of Minoan religion and the ritual landscapes of Bronze Age Greece.
Archaeological evidence so far indicates that the sanctuary was founded in the first half of the 2nd millennium BC and reached its peak during the New Palace period of Crete, namely between 1700-1400 BC. Within that period, Minoan Crete was the dominating maritime power of the Aegean, while Kythera provided a stepping stone to the Peloponnese and consequently to mainland Greece.

The Byzantine church of Agios Georgios tou Vounou (St. George of the Mountain)

Religious cult never abandoned the peak of the mountain, as the prehistoric shrine was succeeded by a Christian temple dedicated to St. George, hence the name of the site. The current renovated church was originally constructed in the early 7th century AD; today, the only remnant of that oldest phase is the mosaic floor of the church, depicting hunting scenes, birds and decorative motifs. The church of St. George along with that of Agioi Anargyroi at Paliokastro are the most ancient Christian monuments on the island, indicating a thriving local community as early as in the first centuries of the Byzantine era.
Nowadays, the church remains a focal point for locals and visitors alike; especially on the feast of St. George, when the peak is once more flooded with pilgrims, just as it’s been happening for thousands of years.